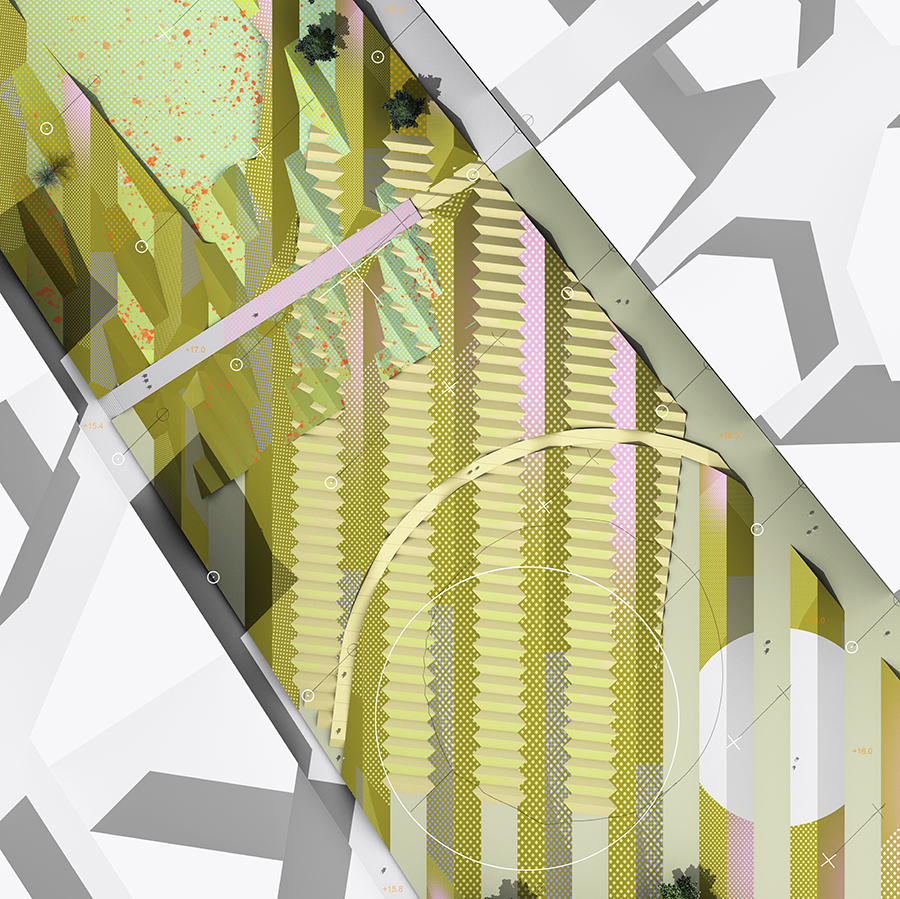 A New Terrain in Helsinki, Finland, in collaboration with Secretary and Tobias Emilsson

In the pressurized environment of the 21st century new relationships to landscape, ecology, leisure, work, and each other are required. Earthworks proposes the construction of a new social and ecological terrain upon the old airfield at Malmi Lentoasemanpuisto. Formed by earthern ramparts, lush meadows, programmable surfaces, a network of pools, dams, and tracks which take visitors through a landscape that feeds the body, the imagination, and the earth itself. The proposal turns the old tradition of erasing the ground in order to create flat surfaces on its head, by erasing flatness in order to produce terrain. 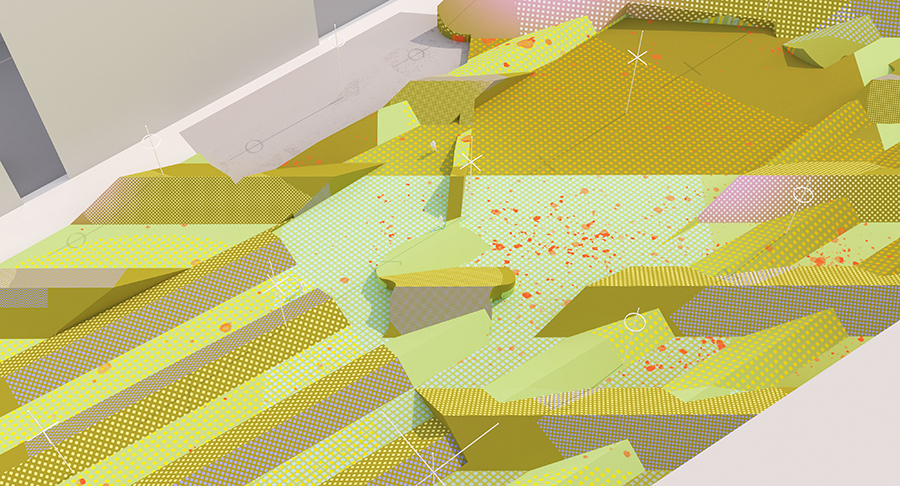 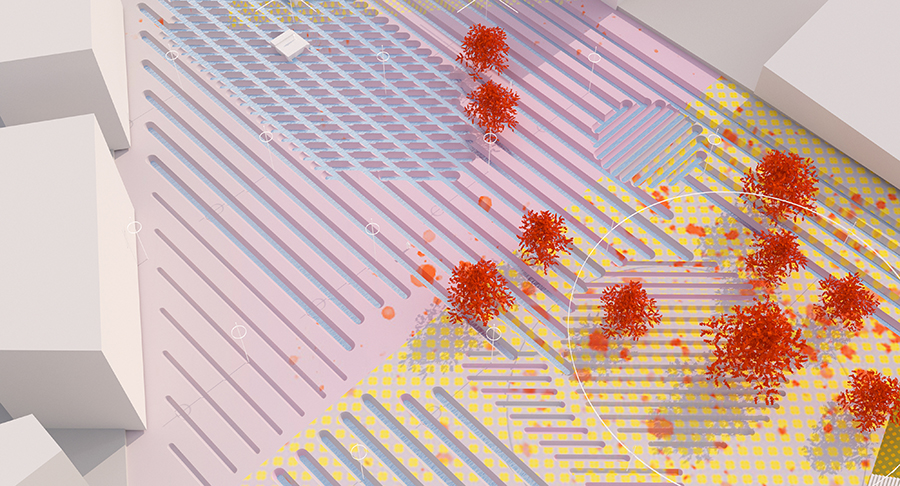 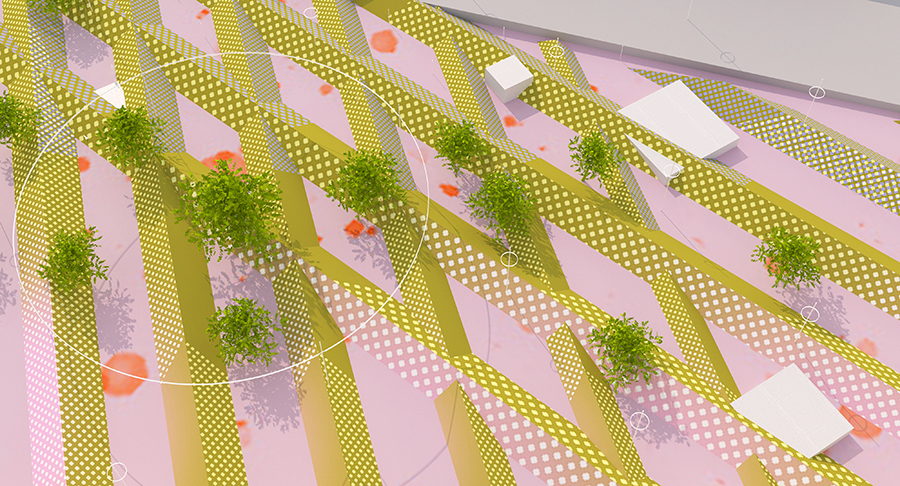 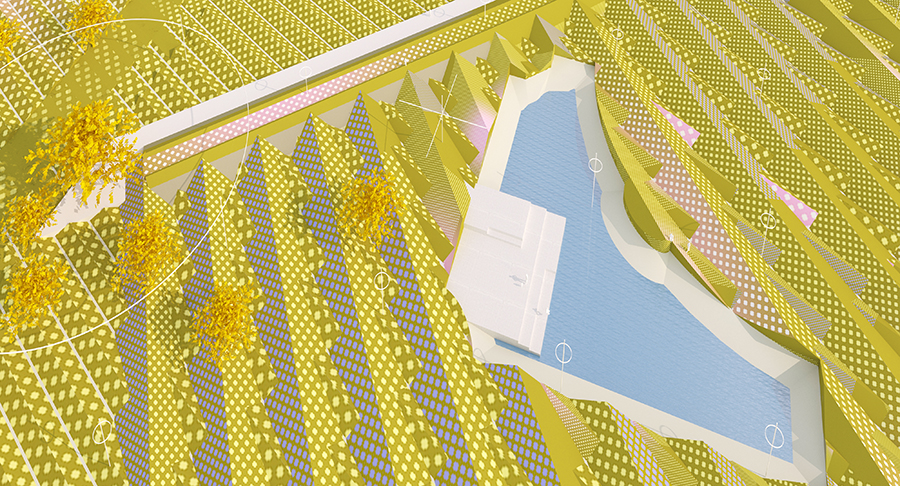 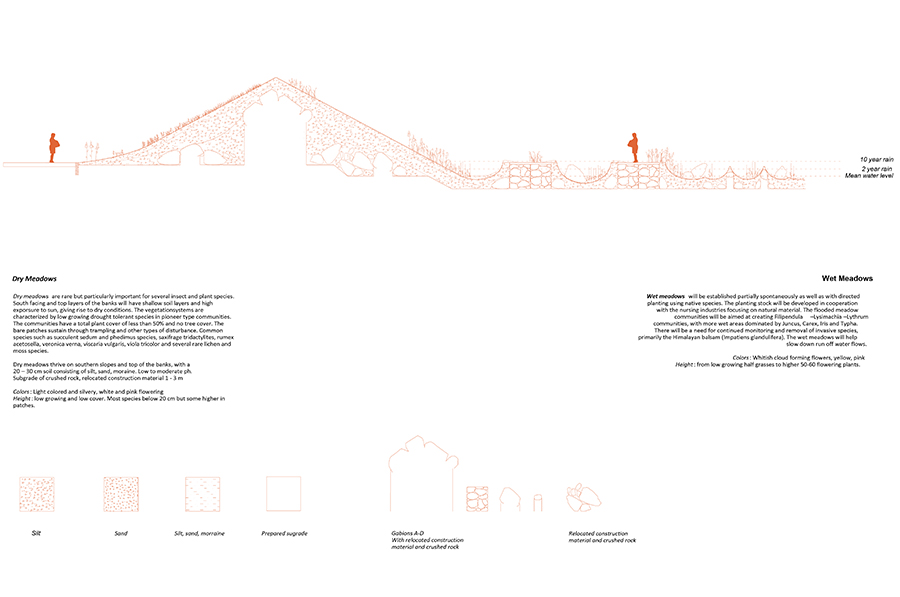 To open up for the new, the yet unthought, the design rejects the now-exhausted idea that urban landscapes shall form flat, unornamented, unobtrusive, and anonymous backdrops for predictable programs of temporary events. The square, the park, the field: most of us have a lifetime of occupying these terrains, of performing their choreographies. Forming new social, recreational, and ecological practices require a new “ground”: a new terrain. Through Earthworks the undulating landscape of Malmi Lentoasemanpuisto is envisaged as a space for experimentation with activities that do not yet exist, sports that have not yet been played, and social practices of gathering and exercising that stimulate the imagination as well as the body. The proposed careful preparation of the ground is achieved through a folded terrain of “ramparts”—a historical term for a bank or berm of earth. These ramparts make use of rubble from urban development actvities on site and from across Helsinki. Like the wrinkled skin on a bulldog, the folded surface multiplies the surface area without losing contact with the ground, increasing the park’s area by 20%. 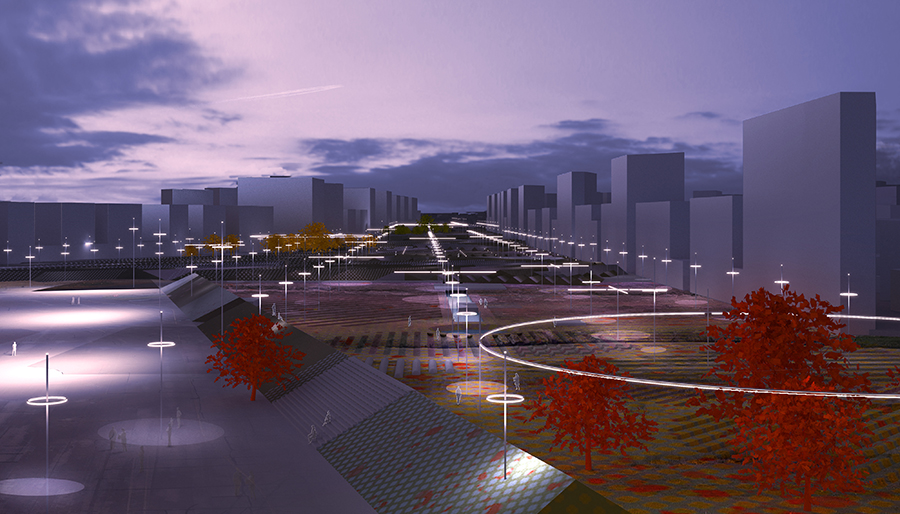 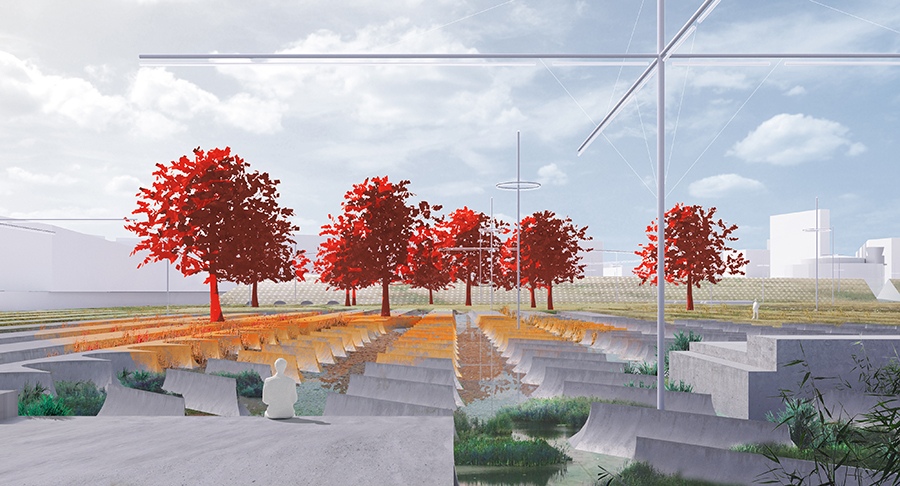 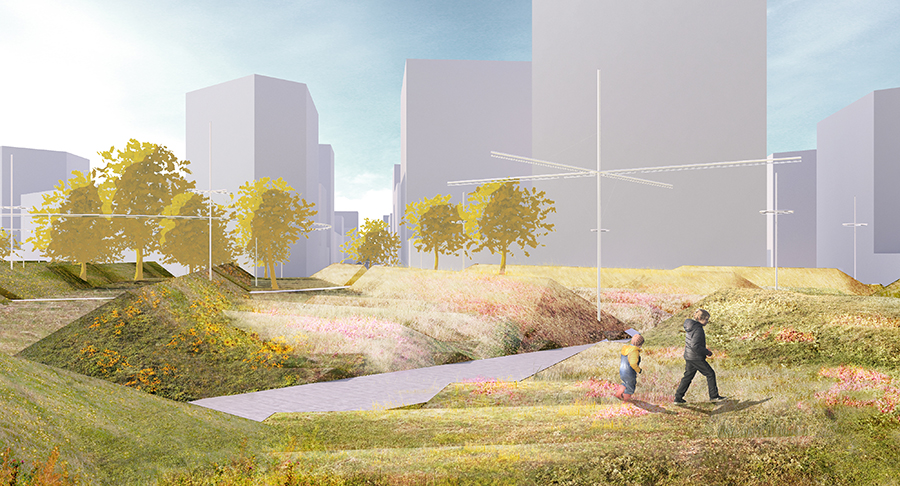 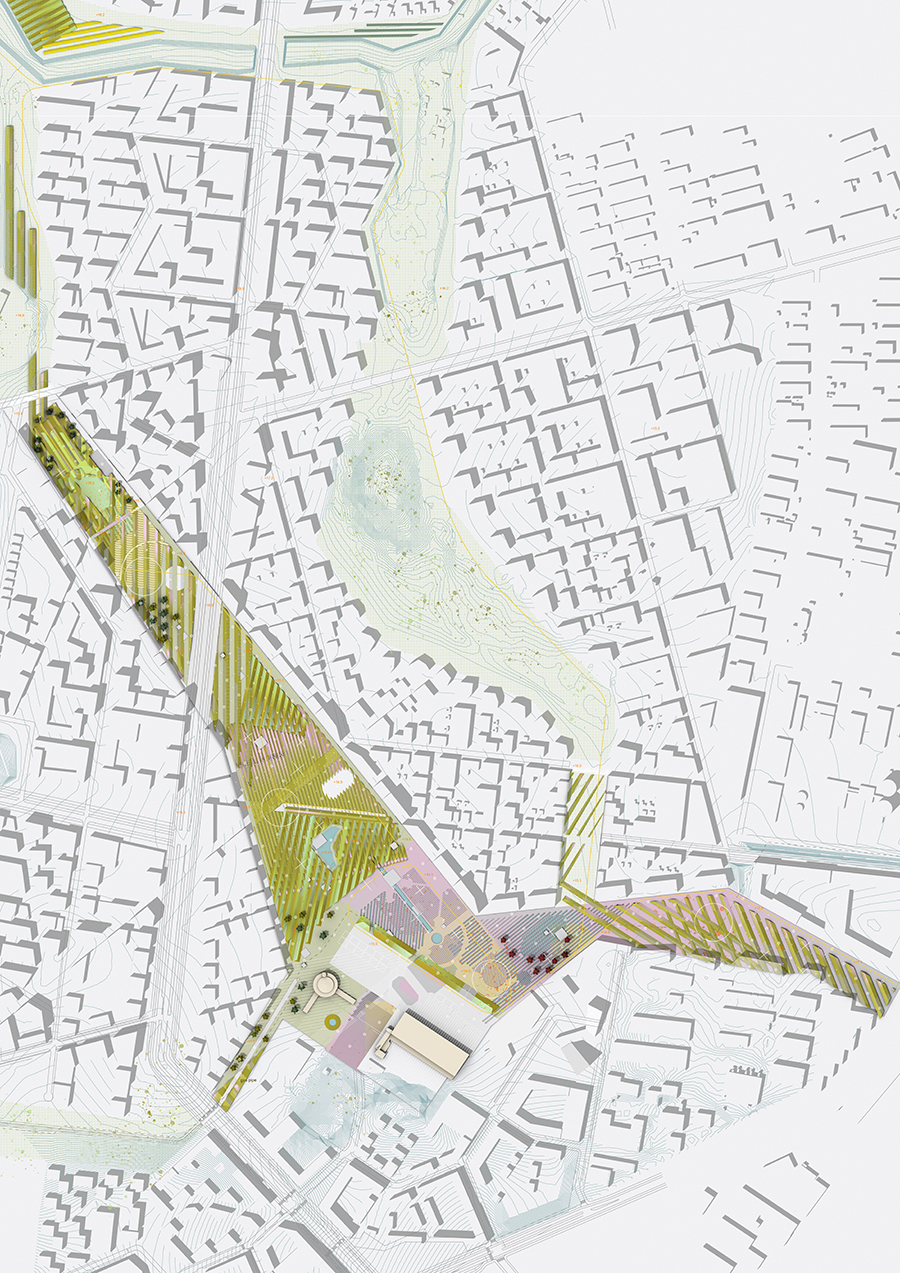 The multi-directional lines of the ridges follow the axes of planned streets and sun angles, providing heterogeneous conditions for plants that vary in sun exposure, material, climate, habitat, and degree of disturbance. The park has been zoned by way of four key vegetation types—woodland meadow, dry meadow, wet meadow, and meadow on clay—which have been selected in order to complement local biotopes within north-east Helsinki and reflect these conditions. Hydrologically, the terrain both channels flows of water and wetlands and dams act as retention basins capable of storing water in flood conditions. Earthworks provides a solidly researched foundation for the development of biodiversity, through the establishment of diverse plant species and ecologically important biotopes.

Earthworks is unique hybrid: it is a highly productive landscape, ecologically, but it works intentionally with visualisation and symbolism. As vegetated varying terrain it forms an image that changes throughout the year. The ramparts of the proposal can be described as designed through techniques of “rasterization”, in a double meaning. Etymologically “raster” takes its name from an agricultural device, a pitchfork-like rake used to break up soil in a pattern of parallel lines. More recently the concept of rasterization is also used to describe processes for displaying digital images on a screen. The raster design of Earthworks creates a sense of vastness at eye level and from the air. Like waves on a choppy sea or the rows of trees in an apple orchard, the linear form of the ramparts give a sense of spatial depth and distance. In-between the ridges, small pockets of intimate and protected space are created. Whether blanketed with snow or with meadow flowers, the undulating terrain forms an ever-changing scene when viewed from the apartments and streets that will surround it, at the same time retaining a unique identity as an object of landscape design and as a space to inhabit. 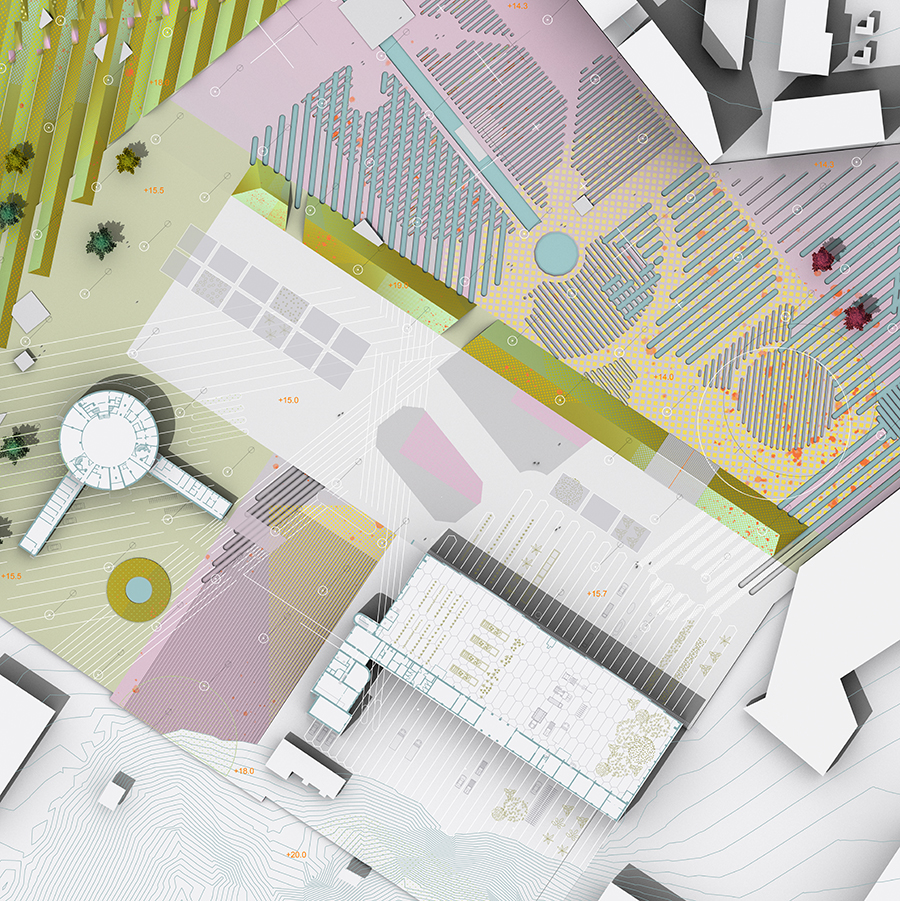 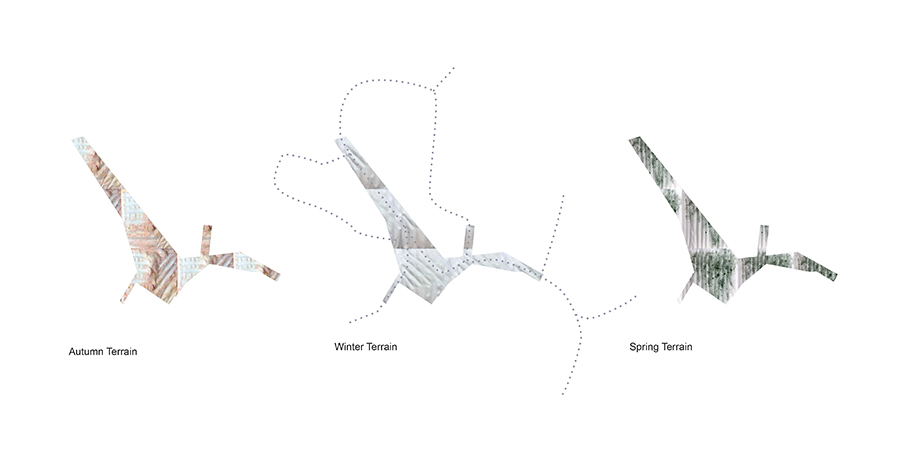 To make space is also a physical act of maintenance. Soils will be recursively moved and mounded, slopes and plots will be gardened by sowing seeds and planting vegetation by a team of gardeners. Involving the architectural disassembly and reassembly of grounds, these alterations over time will form new layers, new rasterizations of the terrain. Acknowledging the importance of this work, the existing buildings of the site are dedicated to research on ecological systems and gardening as an act of ecological maintenance, possibly also considering the whole site as a field for experimentation. EARTHWORKS is to form the central point within a larger territory of care, enriching its surroundings ecologically, socially, and culturally, over centuries to come.

The competition proposal Eartworks is a collaboration between the architecture practices Brrum and Secretary and ecologist Tobias Emilsson for the Lentoasemanpuisto Ideas Competition, arranged by the City of Helsinki and the Finnish Association of Landscape Architects in the fall/winter of 2020-21.